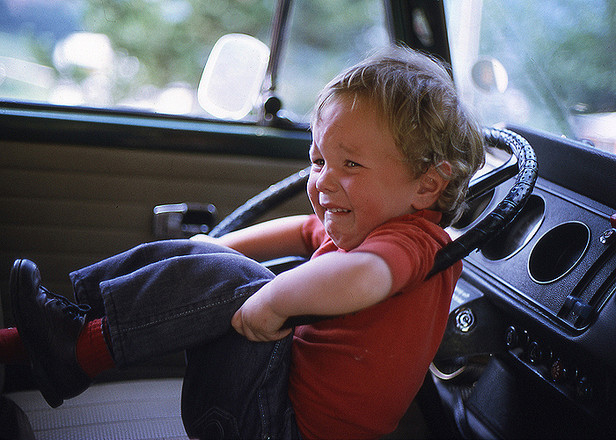 Location: Interior of '69 VW Camper, somewhere along the Mediterranean coastline.
Scene: A very young Erich Ernst finds himself in a precarious situation. Having arrived there on his own, he does not panic, but instead quitely and calmly asks for help.
Recap: Threading the fine line between observation and participation, my father opted to shoot first and ask questions later. The light was perfect, after all, and I'm sure it took no time at all to retrieve the Pentax, load the film, switch lenses, focus and compose the shot. And so, at an early age (in a buried memory) I learned that I'd rather take this photo than be in it.
Based in Des Moines, Iowa, I've been working in just about all facets of photography, design and film and video production for over 15 years now. I've met people, both in front of and behind the camera, whom I greatly respect and who's knowledge I have swiped, or absorbed, with zero remorse but great dedication. I've also learned a thing or two on my own along the way. Traveling an extensive part of the world, both for work and outside of it, has taught me to get comfortable quickly in nearly any situation.
I'm fortunate enough to have worked at nearly every position in still photography and film/video production crews, and here's what I've learned: From rain forest, boardroom, rendering plant or tall corn, to people and product, with blunt force trauma, determination, bribery, collaboration, ego-maniacal insistence and/or calm consideration, there is always a way to get the job done. I'll even take dumb luck when I can get it. But here's the thing; luck would prefer preparation.
Erich Ernst
Credits:
Model/Victim - Me (approx. age - 2 yrs.)
Photographer & Parent of the Year - Duane R. Ernst
Accomplice/Costuming/Hair - Ellen A. Ernst
Camera: Pentax (Asahi), 35mm Color Reversal